As I mourn the loss of my father, I find it helpful to share my stories. Here’s the story of how he rallied for a week.

You know before you have kids, you watch TV shows of women in labor. They’re chatting with their friends in a restaurant, get a quick cramp, make a confused look, their water breaks, they grab a cab, and an hour later, there’s a clean baby in their arms cooing.

This is not reality.

Death is sorta the same thing. Old guy has a heart attack, gets rushed to the hospital, doctors tell the family he’s not going to make it, they hug and kiss his unconscious body, and pull the plug. The end.

After a few bizarre episodes, my dad was diagnosed with non-alcoholic fatty liver disease in Spring 2013. He was given a prescription to manage his illness and a diet to follow. But my dad was who he was. He took his medication as prescribed, but could have done a significantly better job with his diet. He lost a lot of weight, but gained much of it back. He also suffered from spinal stenosis and took painkillers <he probably should not have> to manage the pain. But doctors hand them out like candy on Halloween, so he always had them available to him. This calendar year, his illness progressed, his weight increased, and he was unable to manage at home. After several stints in the hospital and rehab, he was readmitted in late August for the last time (with the exception of two hours at home in October). I’m not a medical professional and will never claim to be, but I would definitely say that my dad’s care in the hospital and two different rehab facilities was subpar at best. As a highly-concerned family member, this was incredibly stressful. And my dad’s patience with his own care was minimal, so he was constantly calling me to advocate. He’d call all times of the day/night asking me to call the nurse’s station to give him pain meds, bring him food, change him, etc. I was constantly on edge, awaiting some phone call that would put me in a panic. I was ready to cry at any moment. I was ready to jump to his rescue. I was also managing my life at home with a husband, two children, and a career. This is a lot.

My sister Jamie was in the area for a training. She arrived on October 20th. We visited my dad that day together, and it was the worst day so far. The weekend prior, he and I talked for hours. We set some goals for him, the biggest one being “home for Thanksgiving”. I was so hopeful. For the next few days, he was proud to tell me he did his therapy. We sat in his room together in rehab and shared stories and enjoyed each others’ company. But that day, that Thursday, I entered his room and he was 100% defeated. I don’t know exactly what happened in his body or his mind, but he was done. He was angry and yelling at me and just wanted hospice. I was angry back. I told him that I couldn’t invest myself like I was if he wasn’t able to help himself. I talked to his therapists (he had refused therapy that day). I left mad. My mom told me he had a bad day Friday. I wasn’t there. I couldn’t do that to myself again. Saturday Jamie called and told me it wasn’t good. They rushed him to the ER because his blood pressure was super low. He was unconscious. I thought I would live the rest of my life with my dad thinking in his last moments of life that I was angry and disappointed with him. What I didn’t understand then was that that Thursday was the day I accepted my dad’s inevitable passing… and I simply didn’t want to lose my dad. I was fighting with him to fight for himself, but he simply had no fight left. I understand that now.

I spent the night at the hospital at my dad’s side that Saturday. And the next night. And the next night. I only left to shower and grab some food. I wanted to be there until his last minute. My mom was there throughout the day, my sister was there, but I was the only one who spent the night. I simply could not leave his side. Sunday night, my sister, mom, and I sat around his bed and told stories. We spoke to my dad. We lit the room with LED candles. It was peacefully horrible. They left, and I stayed. Monday at around 4 am I thought he tried to speak to me. But I figured at that point I was just delusional from sleep deprivation and anxiety. He had a non-breather oxygen mask on his face, so I figured a noise was just a noise. I watched the sun rise out his hospital window this morning. I noticed nature for the first time that day in what felt like weeks, and I thought to myself “Today is a beautiful day to let go.”

And then something happened. My dad said “juice”. He hadn’t spoken in days. He was just asleep. But he said “juice”. I moved his mask off his face, and he started talking. I grabbed a nurse… who said I could give him juice on a sponge that’s attached to a stick. He said “I was hoping to get a glass of juice.” I smiled, laughed, cried. “I just want breakfast.”

He said “I don’t know why I feel so freaky today.”

I didn’t understand this. I didn’t understand how a man who was rushed to the ER with very low blood pressure, a man who hadn’t had food and had been unconscious for days, could just wake up. But he did. But then fear kicked in – How long would this last? How could we hold on to this? What does it mean?

I learned that before dying, some people rally. What is rallying before death? It’s like a person’s last hurrah. It’s their way of making peace with the world. It’s their way to leave the living on good terms. It’s a way to interact with loved ones. It’s their final gift to family and friends.

The next few days, my dad was in and out of consciousness. He had the innocence of a young child. He wasn’t sad or angry; he was sweet and kind. Wednesday he seemed out of it completely, but then Thursday he spoke again. Because he was in hospice, he wasn’t being fed meals or given an IV or his medications (although we did give him ice chips, ice cream, apple sauce, sweet potatoes, and a few other soft foods on occasion). He was just there in bed, with a nasal cannula providing some oxygen. Surprisingly, he didn’t want pain medications (although they were administered sometimes when he seemed restless in his sleep.) He asked the hard questions, like “Will I get to leave here alive?” and “Can I just go home?” I had to come up with answers really quickly, like “Home is where your family is, and we are all here with you.” Everyone got to visit him. They had their last talks with Tony. They got to hug him and kiss him and tell stories. My dad even made a joke with the rabbi who came to visit. 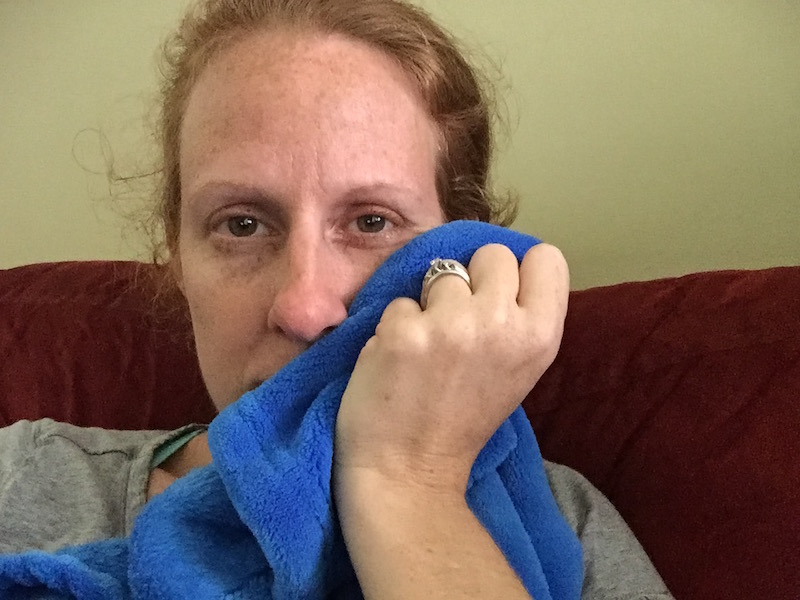 My dad’s last full day was October 30th, 2016. It was a Sunday. That day, I woke up early. I headed to the hospital around 9 am. I woke my dad up, and he was hungry. I fed him a big bowl of oatmeal. He devoured it. Then I brushed his teeth and his hair. He wasn’t very responsive, but he quickly opened his mouth for bites of food and teeth brushing. He enjoyed the hair brushing and lotion massage for his arms. I joked about giving him a Donald Trump hairstyle. It was a really nice morning. And I was the last person he interacted with before falling into a deep sleep forever. The nurses said he seemed to be taking a turn for the worse later that afternoon.

In this whole journey, I feared my dad passing alone. I wanted to be by his side. I was supposed to spend the night. I got to the hospital with my laptop and blanket on hand at around 5 pm that Sunday. I sat in a recliner next to him and did some work. At 11 pm I was finished working, and started getting ready for another sleepover in the hospital. I went to the bathroom, grabbed a cup of water, and returned to my recliner. And decided to leave.

In this whole journey, I feared my dad passing alone. In retrospect it is more important that he wasn’t living alone. And he wasn’t. His last conscious moments were spent with me taking care of his needs. It was such a peaceful moment together. It was truly an honor to share his presence. My dad passed at 2:30 the morning of Halloween.

Rallying is the gift people give us before they leave. My birthday was a week later, and I could not have asked for a better birthday gift than those last few days at his side. If I dwell, I’m angry. If I dwell, I’m sad. If I dwell, I recognize how lucky I was to have a dad to love me.

Thank you, dad, for those last few days together. They will stay with me forever. They are my best birthday gift ever.

This is the memorial video I created for his ‘celebration of life’ service.