From the moment you announce your pregnancy, critics emerge from the woodworks. People you’ve only met through social media, people you haven’t spoken to in years, people you randomly speak to in grocery stores… every last person has a strong opinion about parenting. The critiques, unsolicited advice, eye-rolling, judgment, it’s a constant when you become a parent. So when I told people I was taking my children to the Pride event in Downtown Gainesville, well, no surprise to me — people had opinions. Shocker, right? Well, good news — I have the confidence to make what I believe to be the right decisions for my kids! 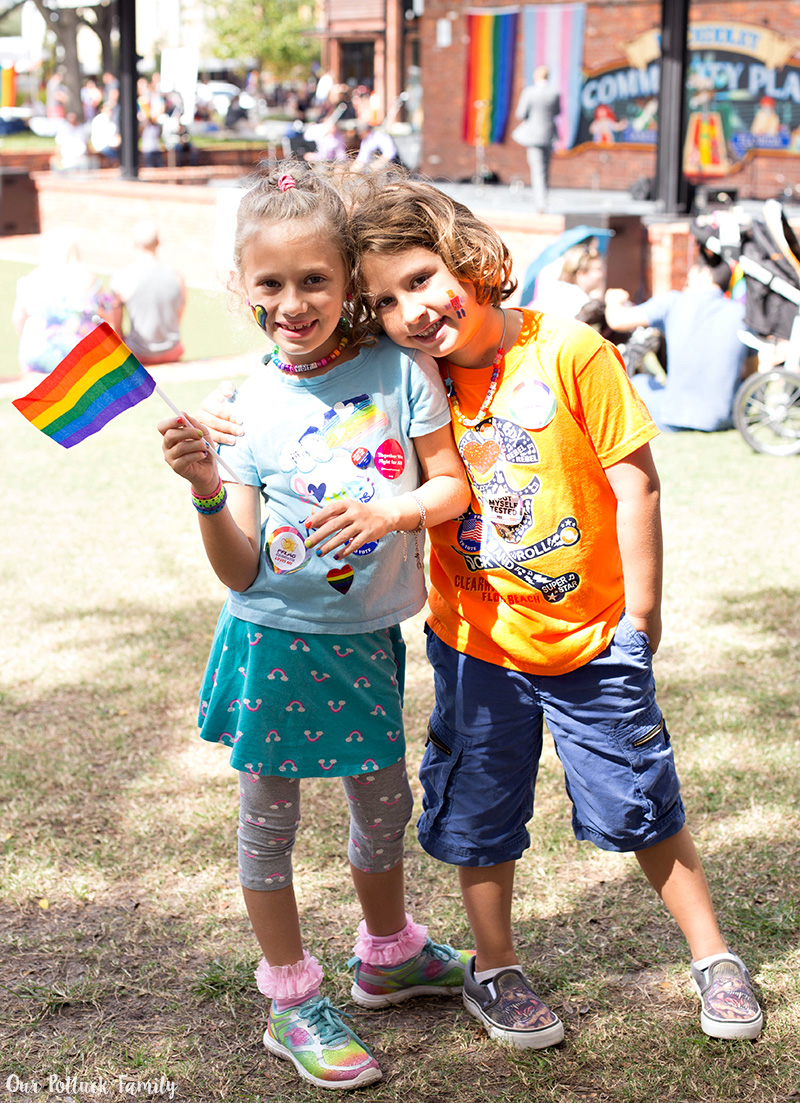 I’m not going to go too into my identity. You can read about it HERE. However, I will say that supporting the LGBTQ+ community is the best way for me to exist as a bisexual woman in what people would consider a stereotypically monogamous heterosexual relationship. I realized a while back that I couldn’t just be an ally. I want to be an advocate/activist in whatever way possible, and for me, a big part of that is teaching my children awareness and acceptance. 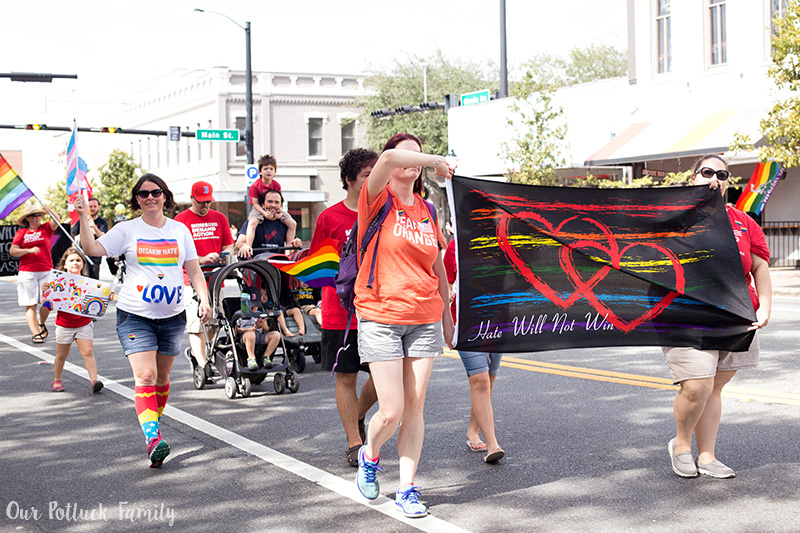 So a Pride event — What’s it all about? Well, having been to a few myself, I can tell you that they vary regionally. When the kids were very little and we were staying in Louisville, Kentucky, we stumbled upon a Pride event. It was in the later afternoon/early evening. There was a parade that was more about dressing in costumes on very well decorated floats and having fun than it was about activism. Unfortunately, that deep south mentality crept in and there were lots of protesters holding the “Homosexuality is sin” type signs up.

That was NOT the event in my town! Let me tell you about it. We arrived early, so different organizations were just setting up tables throughout the downtown square. 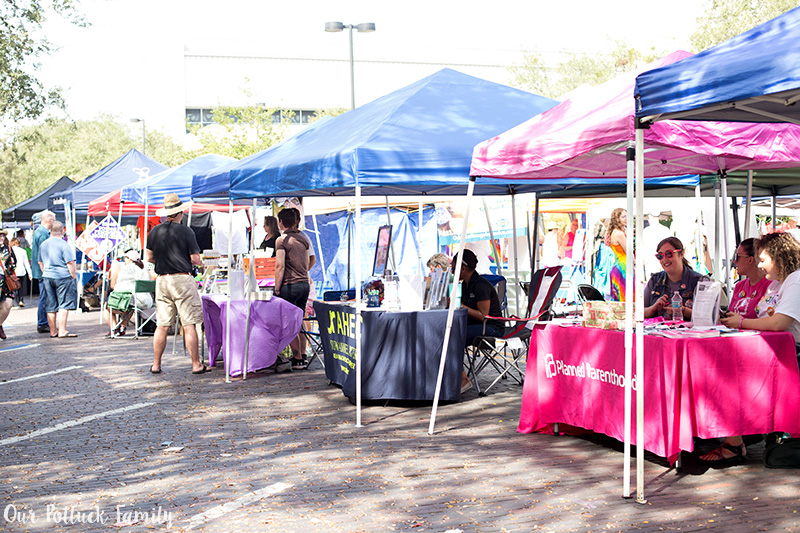 Many of the groups were political in nature, some asked for signatures for petitions {like one to ban therapists from providing ‘gay conversion’ treatments}, there were animal rescue groups, Planned Parenthood, medical groups for different types of disorders, support groups, vendors selling pride shirts, flags, etc., food vendors selling locally-made products, and more. The kids headed straight for the kids’ craft table and kids’ engineering table {after petting a rescued pit bull, of course}. 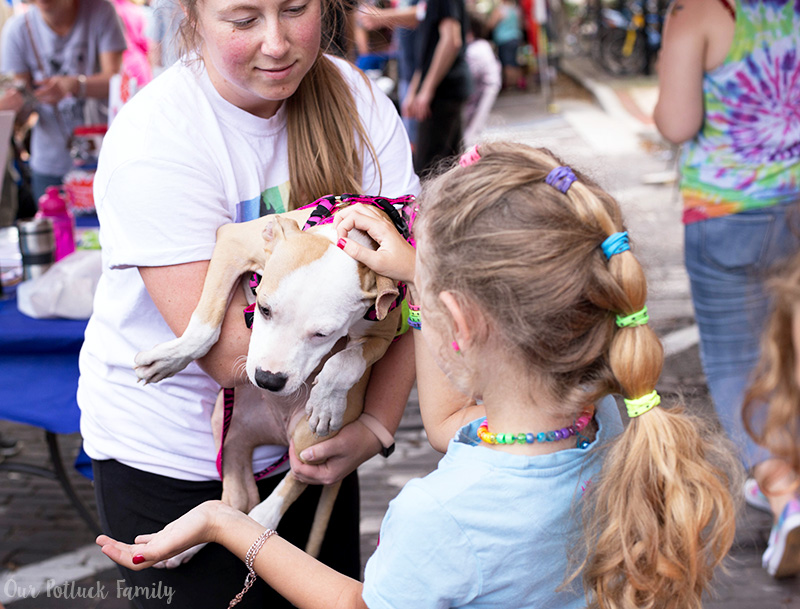 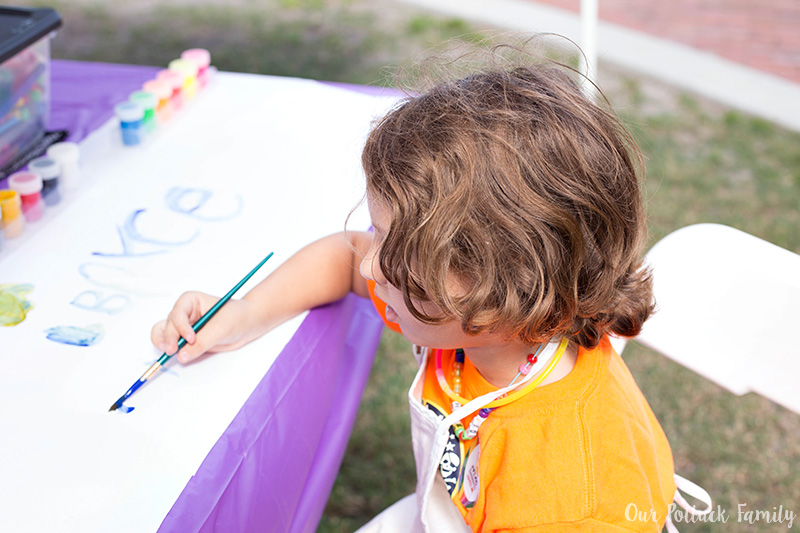 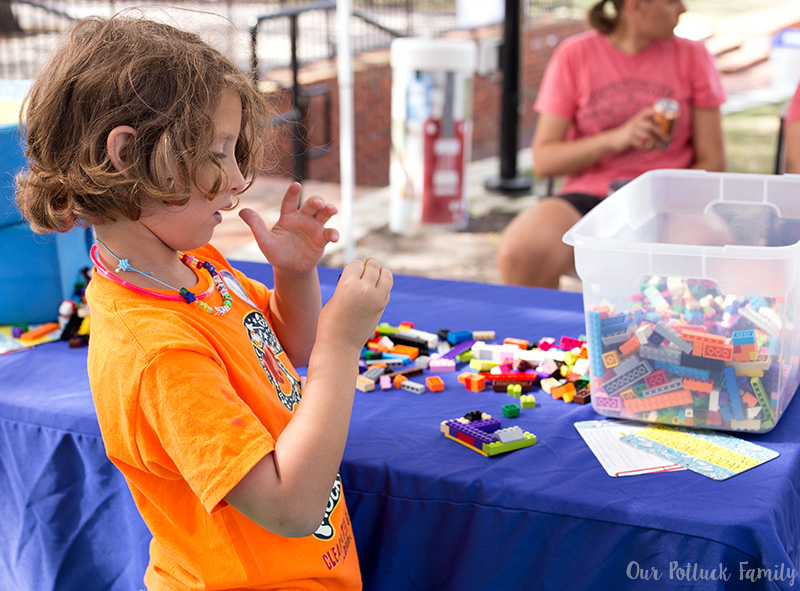 The kids enjoyed watching the parade. I was so impressed by the different faith-based and educational groups that spread a message of love, acceptance, and unity. Local scout troops, churches, different colleges on the University of Florida campus, veterans, and even a high school pride group. The kids really enjoyed watching the parade and cheering on the participants! 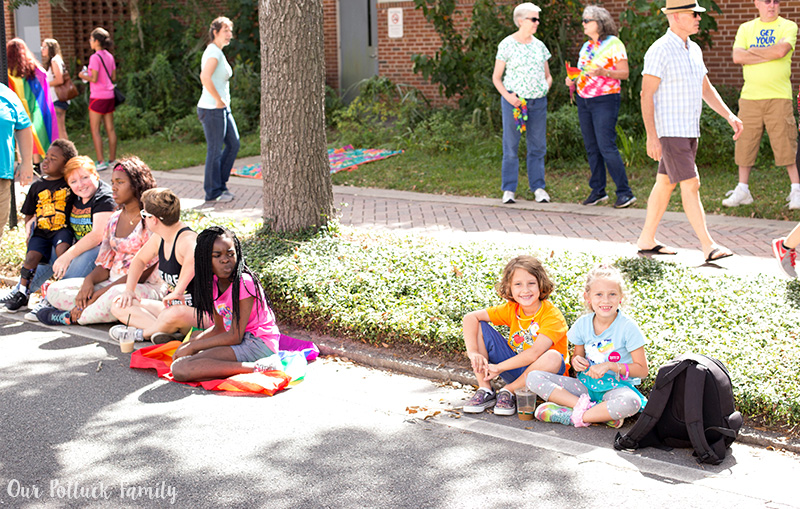 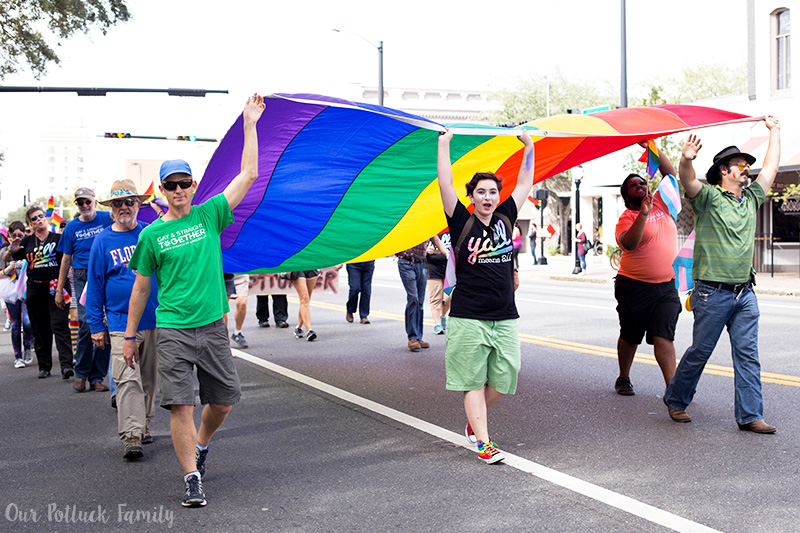 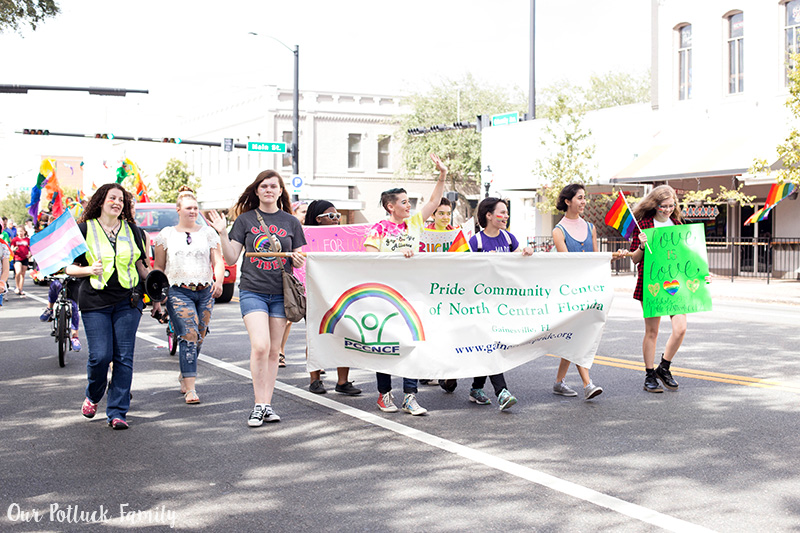 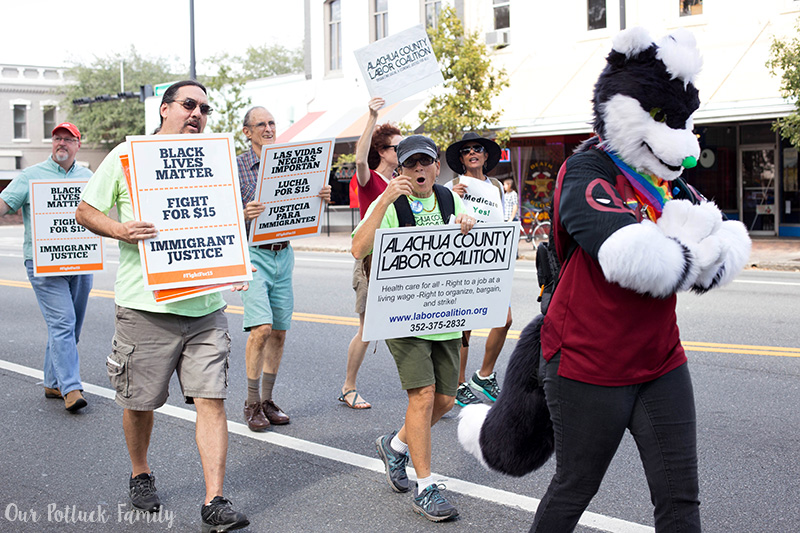 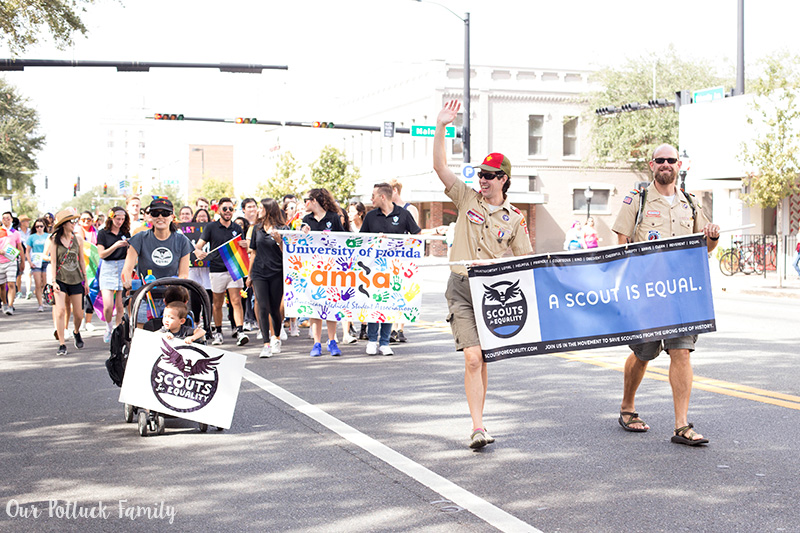 The overall vibe was one of support and community. It was a really positive feeling, where people of all ages participated. I was happy to see other children at the event. I wish more people felt safe and confident bringing their children to Pride events. I’ve spoken of this before, but humans make the grand mistake of pairing sexual identity and sex, which have little-to-nothing to do with one another. Everyone was appropriately dressed, acted appropriately, and sent a very clear message of respecting and appreciating one another. 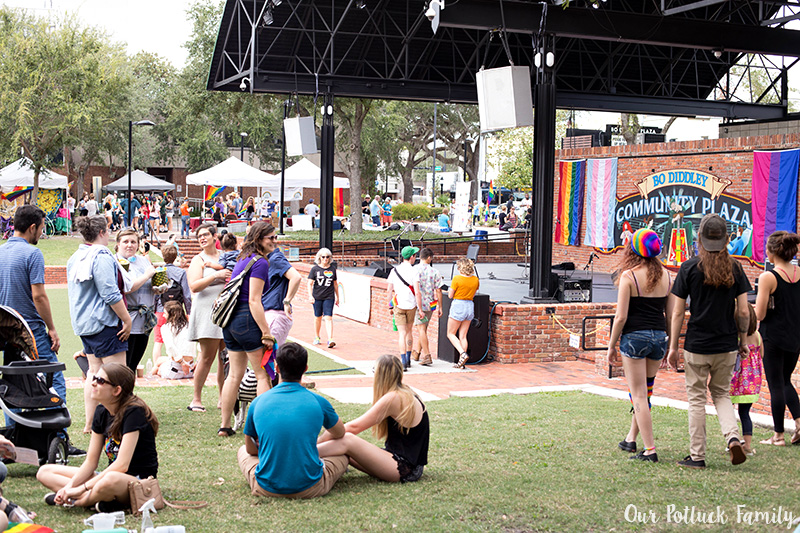 My children had some questions throughout, and I answered them all with honesty in a manner that they could understand. They left knowing that this event is a celebration of life, love, and individuality. As a mother, the most important thing I can teach my children is to respect what makes each of us unique and teach acceptance of all different types of people. That’s why I took my kids to Pride in Gainesville, and I am so glad we went! 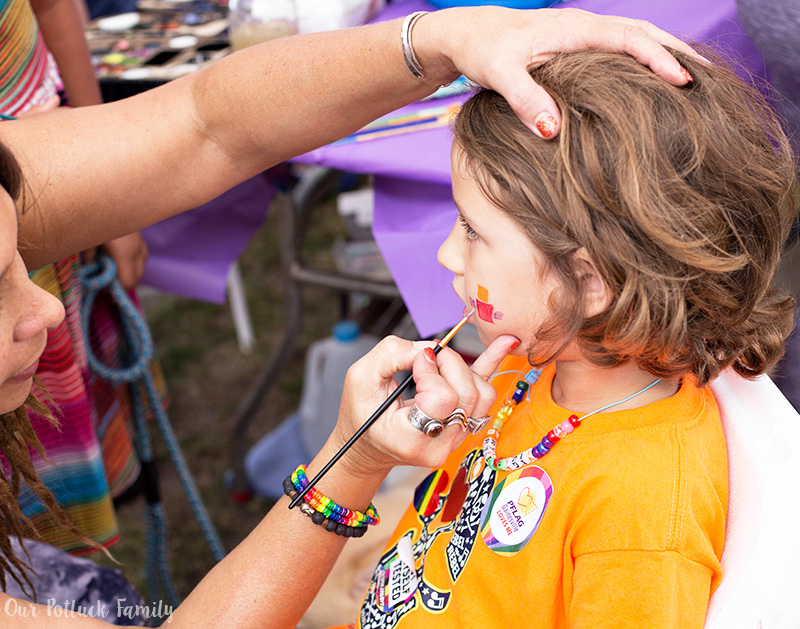 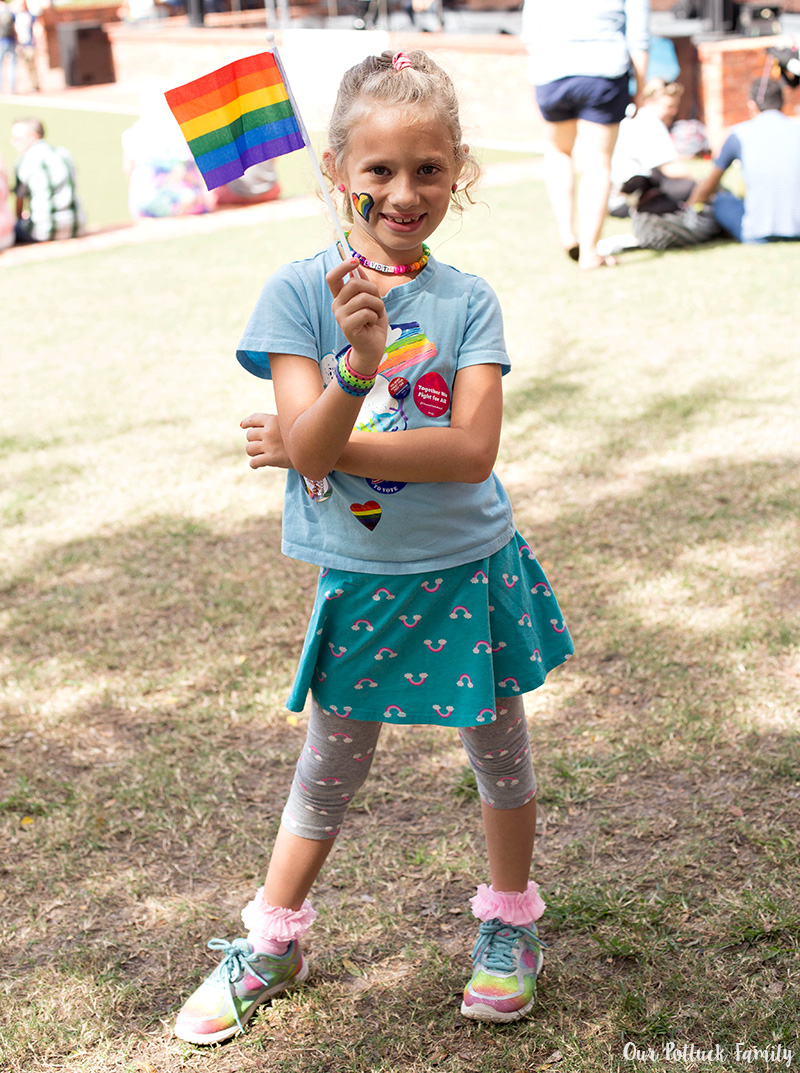