This Sourdough Cinnamon Roll Recipe can be made at home with your sourdough starter.

I’m really been enjoying my sourdough starter. I’ve found that sourdough makes the fluffiest, smoothest dough that creates a soft yet chewy texture in some of my favorite baked goods. I saw a friend pinned this recipe for Sourdough Cinnamon Rolls. I made a few alterations, and thought the recipe was worth sharing with my readers. I added a copy-cat Cinnabon frosting to thoroughly enjoy the decadence of this delicious Sourdough Cinnamon Roll treat. Let me know if you make them! 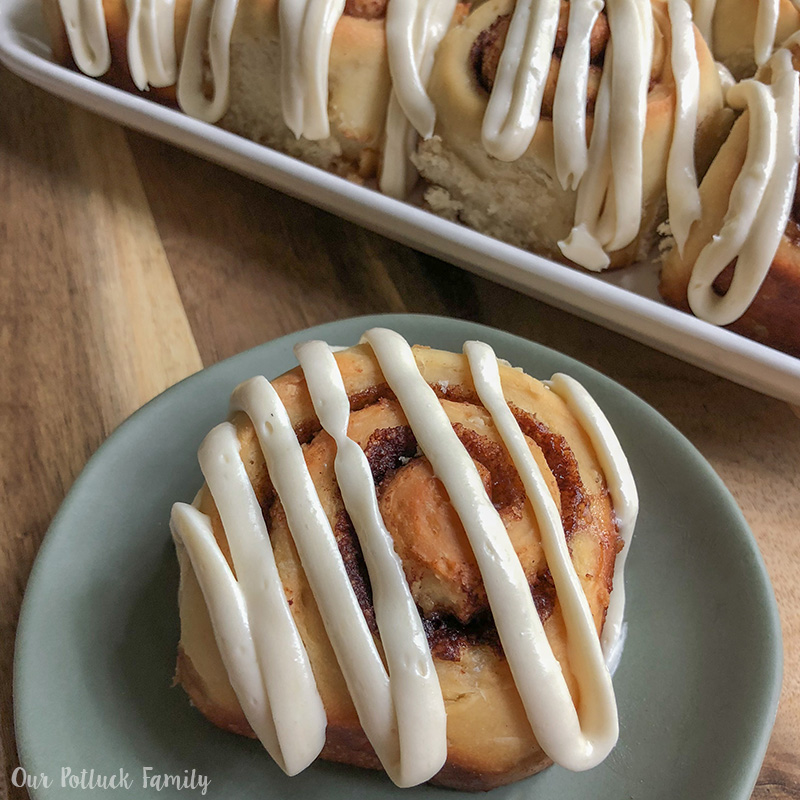 Begin by combining the dough ingredients. I highly recommend a stand mixer with a dough hook attached, but if you don’t have one, you can make this dough in a bowl by hand. Knead the dough for about 5 minutes. The dough should be slightly sticky and pliable. If it’s too tacky, you can add more flour while kneading. The dough should be very smooth. After kneading the dough, put the dough in a greased bowl and place a warm moist towel over the bowl. Set the bowl in a warm place {I put it in either the oven with the light on or the microwave} and allow to rise for about 3-5 hours. The longer you let it rise, the more sour the flavor will be. 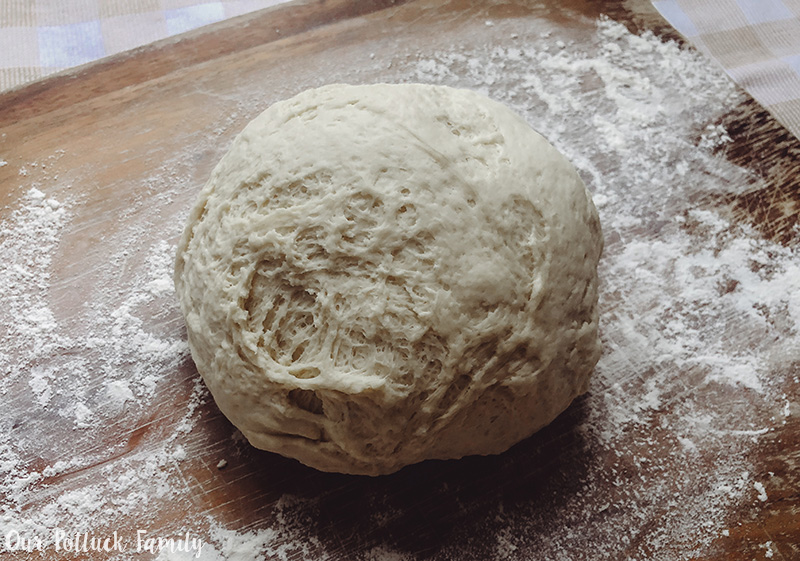 After the first rise, bring the dough to the floured surface and use a rolling pin to flatten it into a rectangular shape. As you can see, this is not an exact science – try your best! For the filling, combine the brown sugar and cinnamon in a small bowl. Use a pastry brush to spread melted butter on the flattened dough. Sprinkle filling mixture over butter and make sure it’s spread evenly. 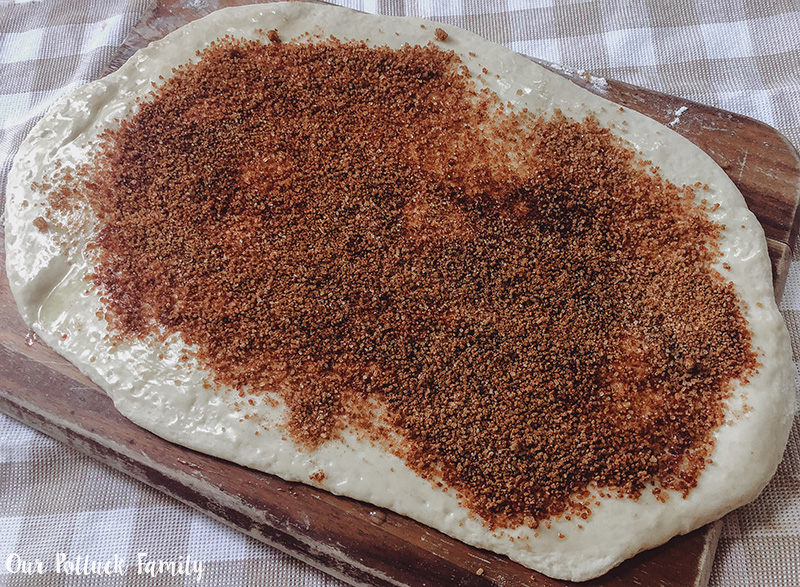 Roll up the dough firmly lengthwise, but don’t wrap it too tightly. You don’t want the dough to break. Use a sharp knife to cut the rolled up dough log into nine individual cinnamon rolls. I began by cutting it into thirds, then cut the thirds into three pieces. Grease an 8″ x  8″ pan with butter and place the cinnamon rolls into the pan. Let the dough rise a second time for about 2 hours. The dough will expand at this time and the rolls will push together. 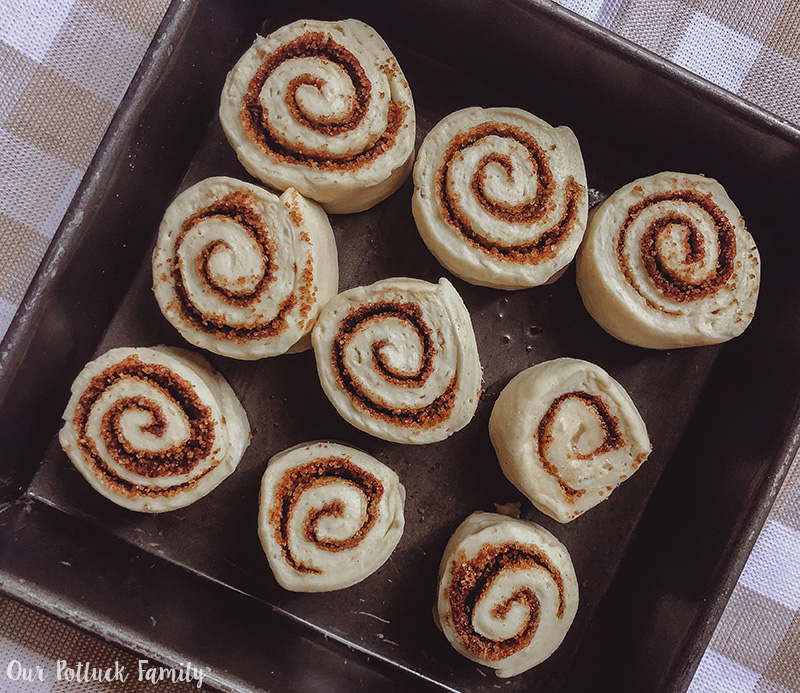 Pre-heat the oven to 350° F. Bake for about 25 minutes or until the tops have slightly browned. You can brush the tops with additional butter to help them brown more.

All the sourdough cinnamon roll pan to cool before cutting them. Meanwhile, make the frosting! Combine butter, cream cheese, powdered sugar, lemon oil, and vanilla extract in a mixer fitted with a paddle or whisk. Let it go for a long time – like 5 minutes – to get a fluffy frosting. If doing this by hand, make sure your butter and cream cheese are very soft so you can whisk them easily. To frost this Sourdough Cinnamon Roll recipe, I added the frosting to a zipper bag, cut the corner, and drizzled the frosting over the top. 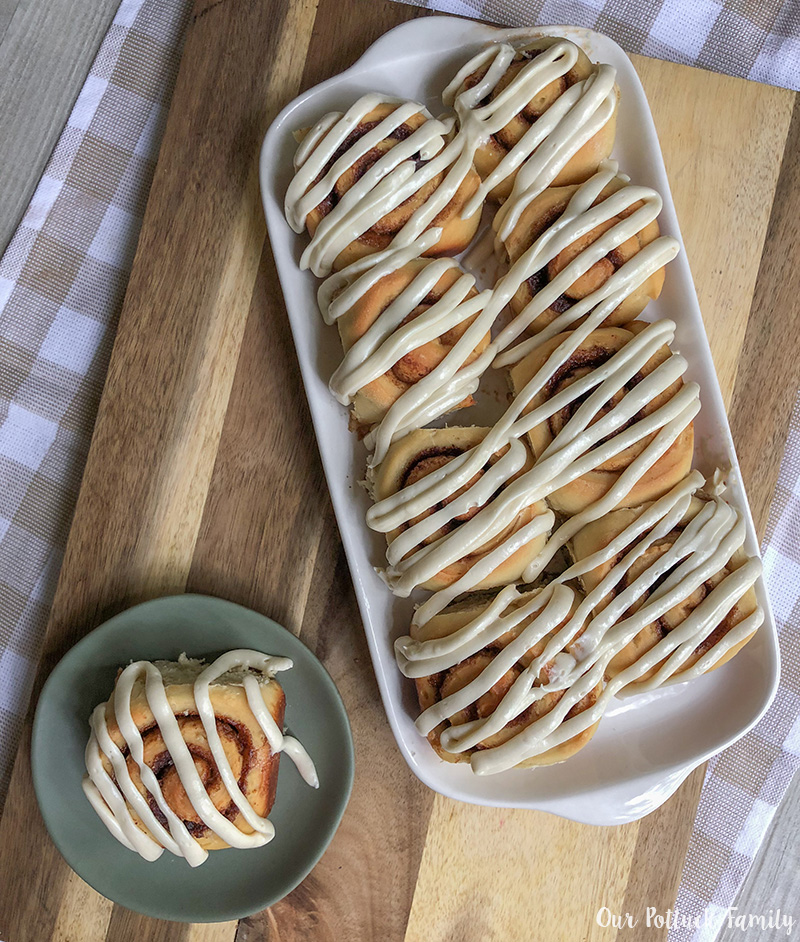 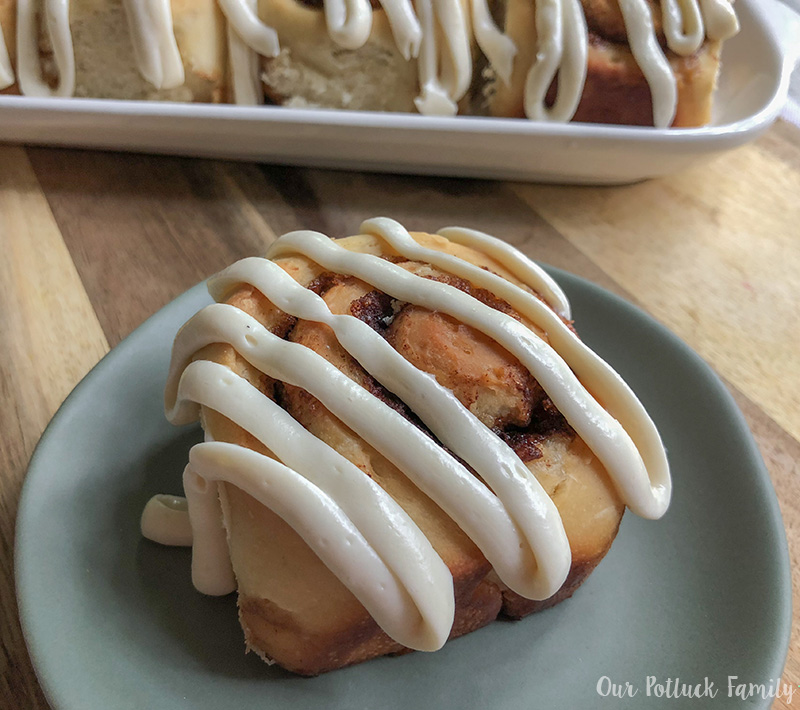 Have you tried this Sourdough Cinnamon Roll Recipe? If so, leave a comment below!

{This recipe was originally published on August 20th, 2013}