Do you have any moments in your life that when you think about them, you just feel like someone is sprinkling memory glitter over your mind? These little magical moments that you own in a special part of your brain, to enjoy at your leisure? For me, that’s my 18th birthday. And not even my planned birthday party, but the unplanned events leading up to my birthday. They just feel like memory sparkles.

That’s why, for my 38th birthday, I celebrated the 20th anniversary of my 18th birthday.

I left for college at the age of 17, summer 1997. My parents had been fairly over-protective, so living in a dorm with a complete stranger, not having any type of curfew, having the free will to come and go as I pleased. Well, it was definitely a huge transition. And with that came some extreme highs and lows for me. In many ways, I was still a teenager, connected to friends I had in South Florida who were younger than me. But at the same time, I was learning how to embrace my adulthood by making new friends and having new experiences in Gainesville. One of my fondest memories from that time was my 18th birthday. I’m going to try to retell this to the best of my ability. I’m certain I’ve altered the details here and there over the last 20 years, but here goes.

This must’ve been a Thursday night, a day before my 18th birthday. There was a movie on the lawn near the Graham dorm area, which was just south of where I lived in Tolbert Hall. It was a chilly night, and a group of us went to see Face Off. I don’t remember who, other than my childhood best friend Alicia and her friend Andy. I can’t tell you much about the movie itself – other than it starring Nicholas Cage and John Travolta. Andy kept saying “face off” while placing his hand over his face and removing it like a mask as he said it. Because it was cold out, we all snuggled up on a blanket to watch this movie outdoors. Afterwards, we went back to Andy’s dorm. He was an RA, so he had a room to himself. Now, I can’t remember exactly who was there in his dorm to start out, but eventually Andy fell asleep, and it was just me and his friend Charlie chatting. Literally. All. Night. So long, that when it was maybe 5 am, Charlie and I decided to walk from basically the center of UF’s campus, across campus, and north along 13th street to Krispy Kreme for breakfast. Charlie was this incredibly intelligent, quirky kid who was a freshman like me {Alicia and Andy were sophomores}. Charlie wore dress slacks, a button-down shirt, and sometimes a tie every single day, while most college guys then did cargo shorts and flip-flops. He also wore rollerblades almost everywhere he went, and was not entirely coordinated, so I can picture him sorta stumbling around in them. I don’t know what we even discussed, and I don’t remember eating an actual doughnut, but I remember the walk there, and the sun rising as we started to walk back toward UF’s campus. We must have been approaching 7:25 am because that was the time 1st period began. Charlie, still wearing his clothing from the day before, walked straight to his Latin class. I seem to recall going back to my dorm, skipping my second period class, and going to 7th period, psych class with Andy.

So now it was Friday, my birthday. That night, I took the bus home to South Florida to celebrate turning 18 with my friends down there. But that movie on the lawn, staying up all night long, walking to Krispy Kreme the next morning, and heading to class later that day… It really felt like my first taste of freedom.

To celebrate this experience again, I planned dinner with Richard and the kids right near campus. Now, while I would’ve much preferred to eat Burrito Brothers for dinner, it went out of business a few weeks before we moved here. So I did the next best thing… I ate at El Indio, which is actually the first Mexican place I tried when I moved to Gainesville. It’s right across the street from Krispy Kreme. 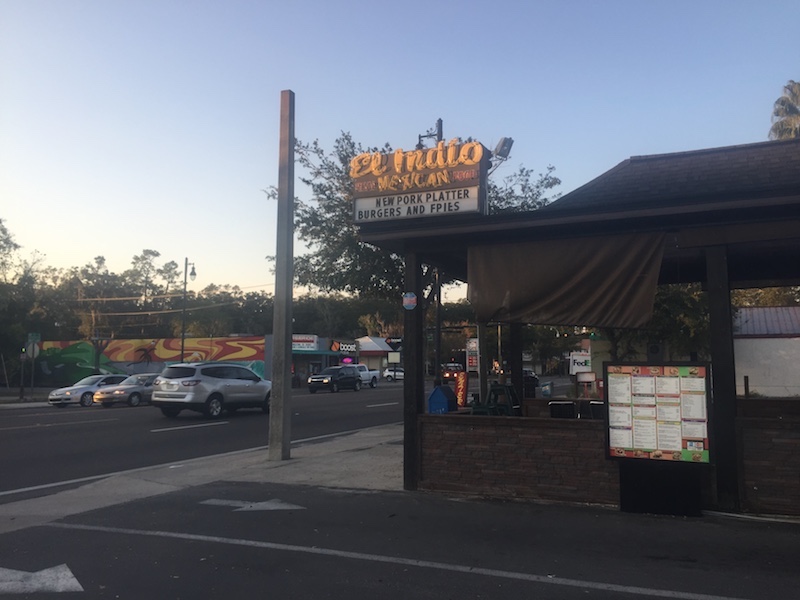 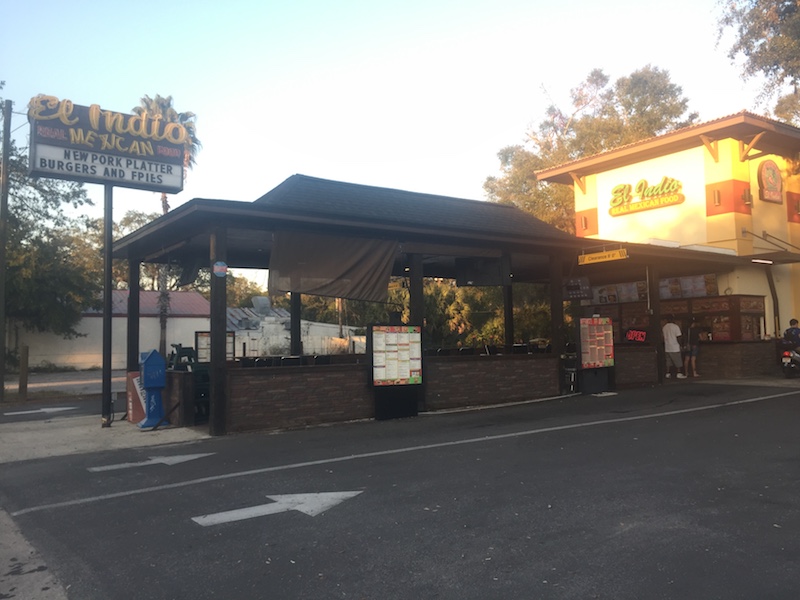 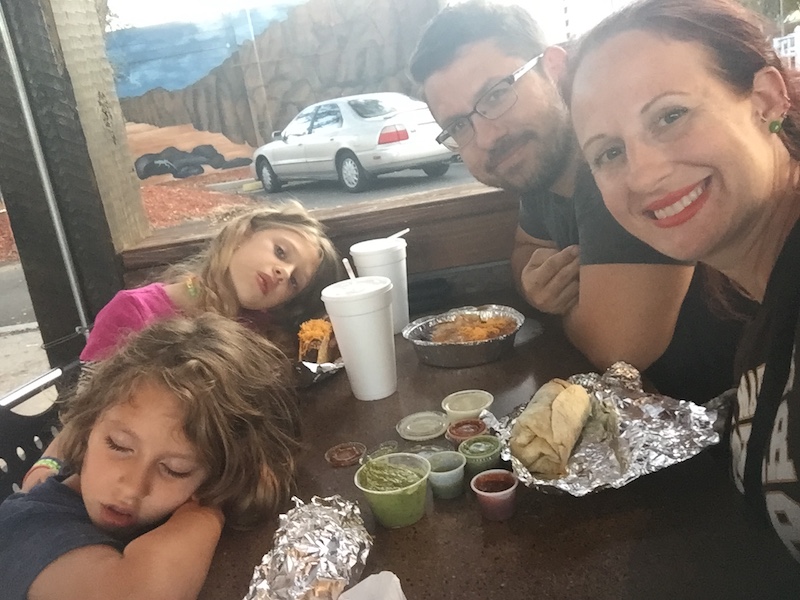 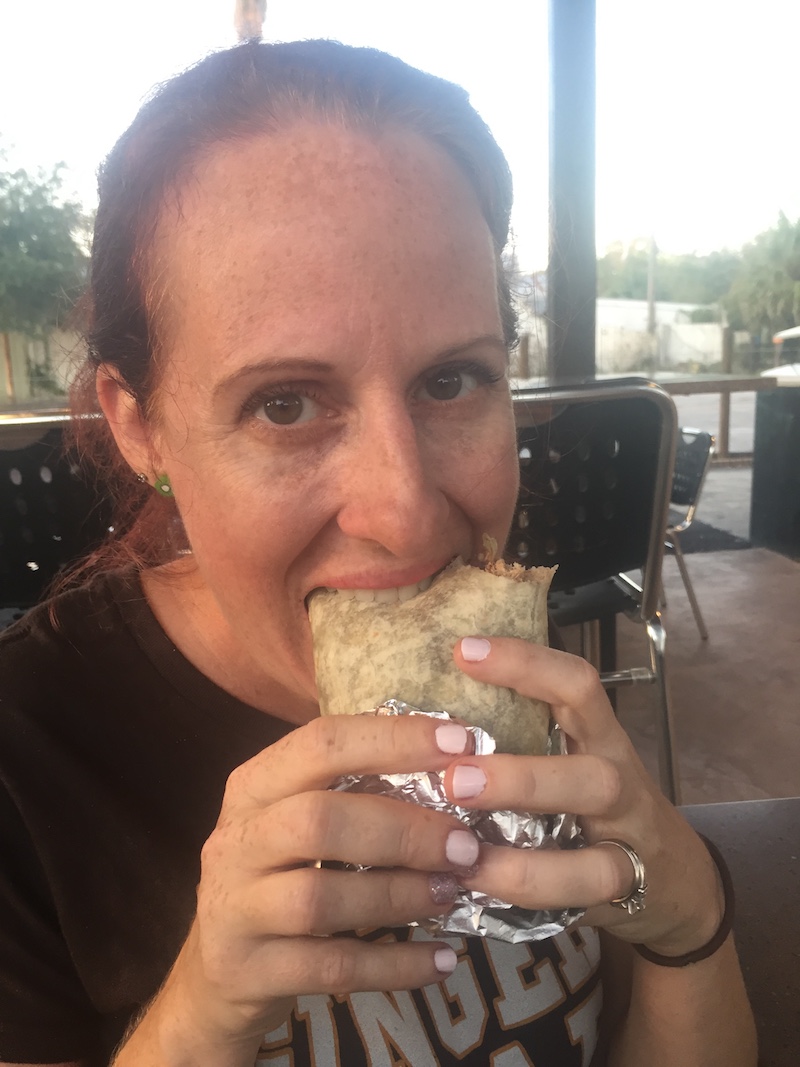 I’m guessing I hadn’t eaten there since freshman year of college, so it was definitely part of the 20 year anniversary of my 18th birthday. As you can see, Bryce slept through dinner, but the rest of us enjoyed some inexpensive, take-out style Mexican food. After, we crossed the street to enjoy Krispy Kreme. 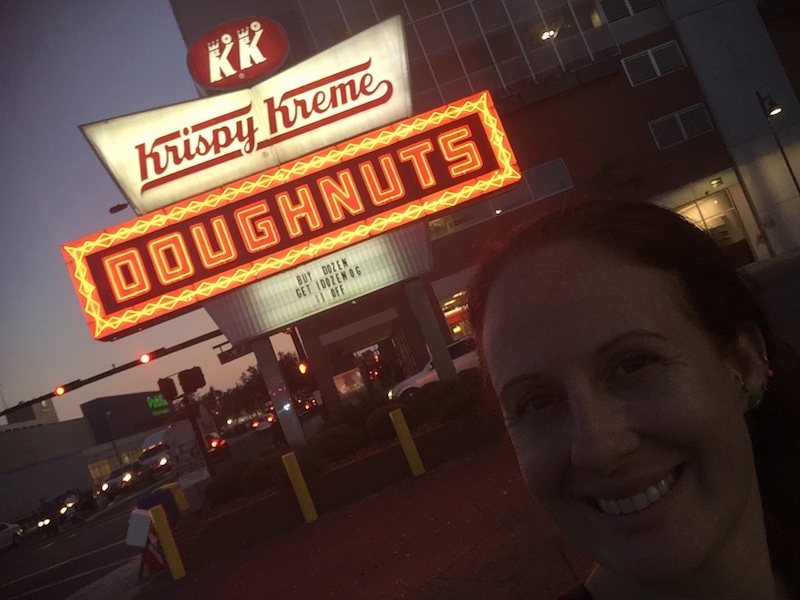 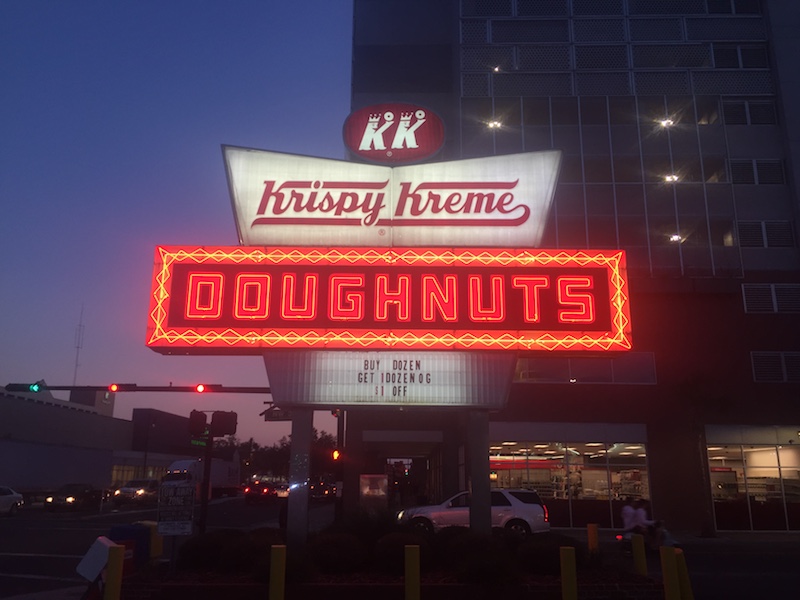 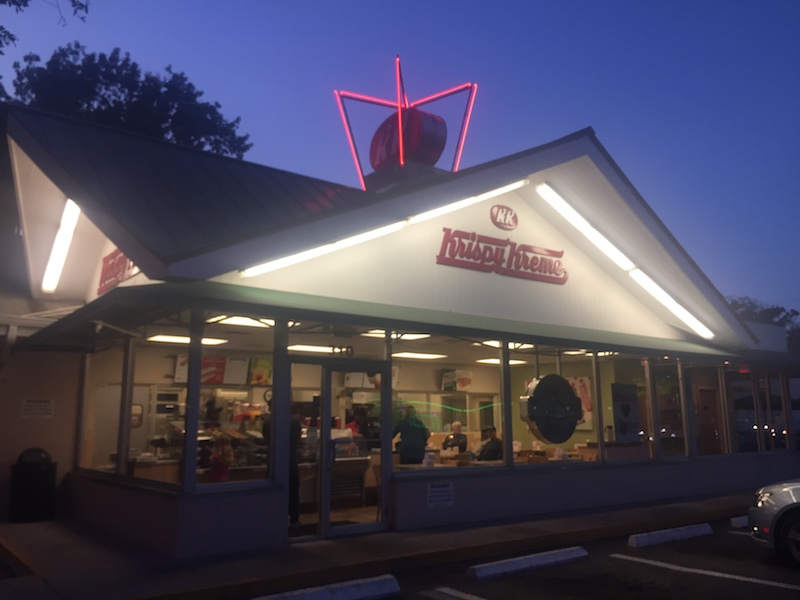 What used to be a street lined with small local businesses is now a corner with high rises, a Target Express, a bank, and other displays of corporate take-over, but this old-school Krispy Kreme is still there, and looks the same as it did that fall day in 1997. I ordered a plain glazed doughnut {because, seriously, why order anything else there?}, grabbed a copy of the Alligator, an independent Gainesville newspaper, and sat at a table with my family. 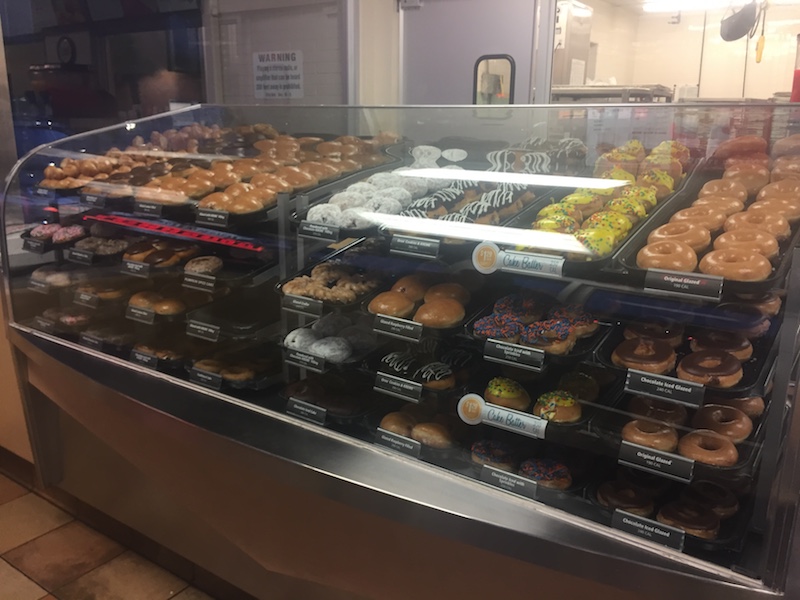 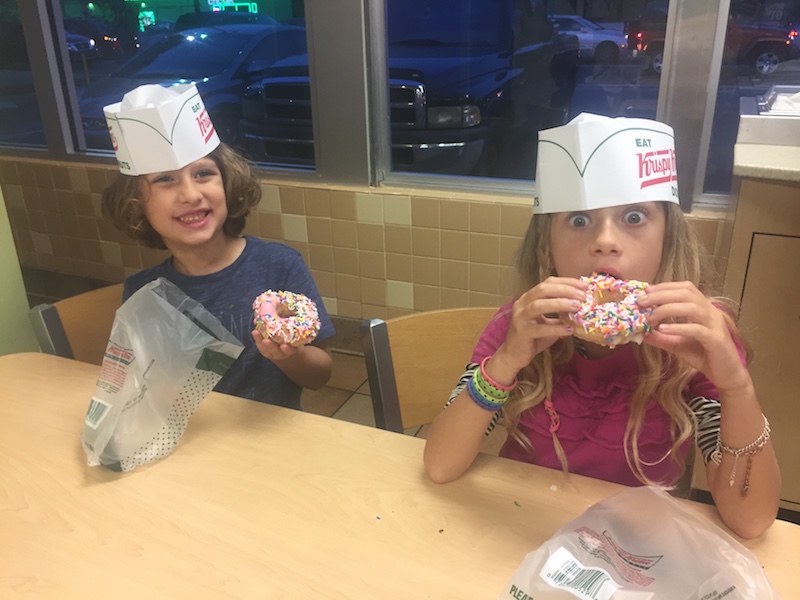 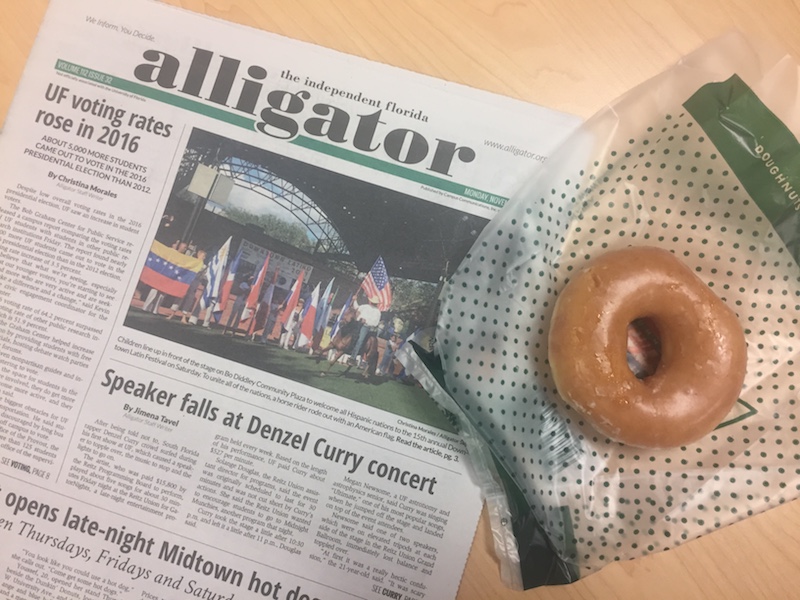 There’s a funny thing about getting older. You start to realize all the things you can’t really do anymore. You can’t party like an 18-year old. You can’t dress like an 18-year old. You can’t walk around town in the middle of the night with a guy you hardly know because you realize how dangerous it could potentially be. You can’t take a power nap and head to class later in the day. And if you take the time to dwell on all the things that you can’t do when celebrating the 20th anniversary of your 18th birthday, you miss out on the amazing things you can do now. So I flipped to the crossword puzzle toward the back of the newspaper and asked the cashier if I could borrow a pen. I remember sitting in my Genetics class with Alicia, trying to complete a crossword puzzle, and I never could. Not even with her assistance. But you know what? Richard and I tore through the entire puzzle in maybe 10 minutes flat. I guess you learn a few things over 20 years, huh? 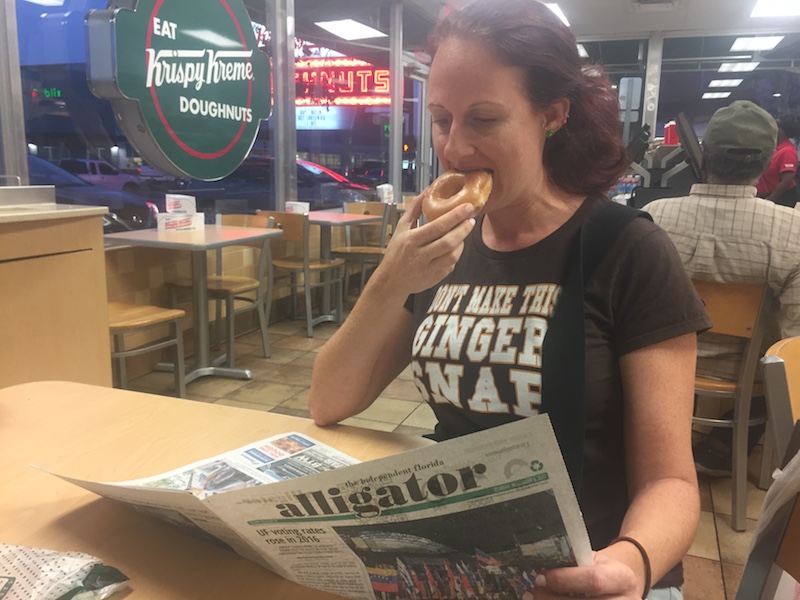